At present, there are many techniques for studying protein-protein interaction (PPI), each of which has its own advantages and disadvantages, and some methods for studying PPI have various limitations, especially in the study of dynamic PPI. A technology called bioluminescence resonance energy transfer (BRET) was developed about two decades ago. Since then, BRET has developed into a whole class of methods that can be used to investigate almost all types of PPI. It has high sensitivity and accuracy, and allows real-time monitoring of dynamic PPI in vivo, and uses easily measurable light as readout signal, which is very valuable for PPI function research. In addition, with the appropriate equipment, BRET can even be used as an imaging technique to map PPI localization.

This technology requires the fusion of luciferase (as donor) and fluorescent molecules (as acceptor) to proteins of interest. When the fluorescent protein is near luciferase, the energy generated by the luciferase reaction can be used to excite the fluorescent protein. When the energy is very close (usually within 10 nm), the energy is transferred from the donor to the acceptor through non-radiative dipole-dipole coupling, resulting in fluorescence emission. The ratio of the energy emitted by the acceptor to the energy emitted by the donor (BRET ratio) depends on the spectral properties, distance, ratio, relative orientation of the donor and acceptor molecules, as well as the strength and stability of the interaction between the target proteins. BRET and FRET are very similar in principle, but because BRET does not require an external light source to excite the donor, it has a very low background and does not suffer from the problems normally associated with FRET, such as autofluorescence, photobleaching, or light scattering. 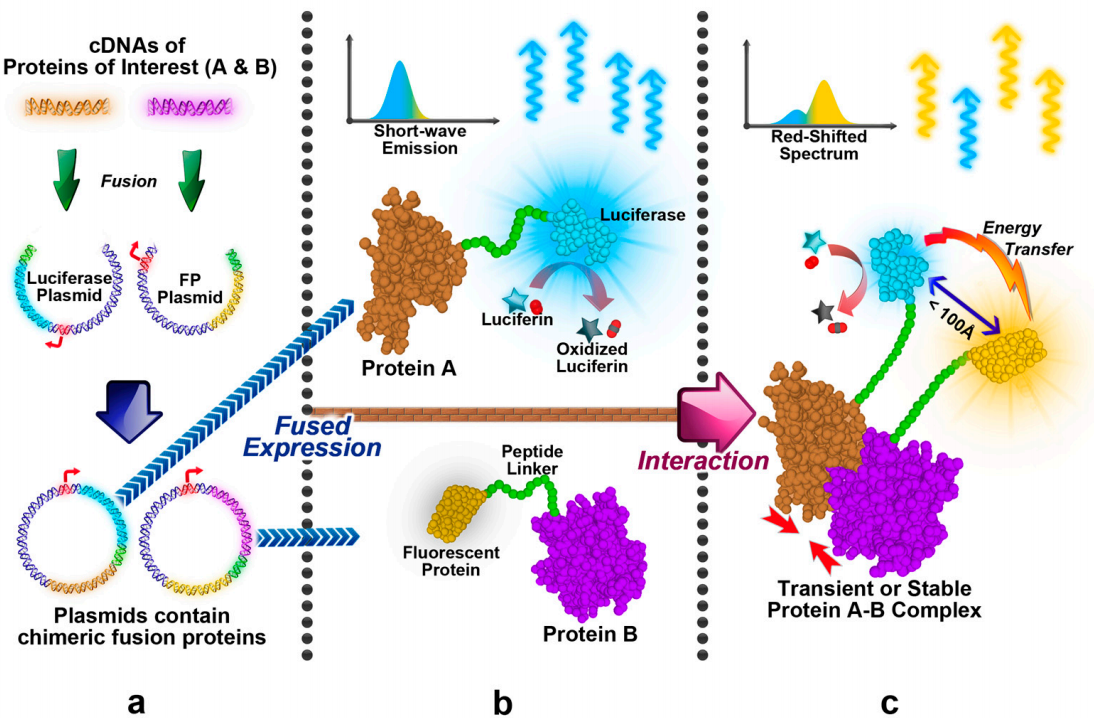 The BRET platform we built can provide customers with one-stop analysis services, including the creation of donor/acceptor and substrate couple, the design of relevant receptors, sorting of cell systems, signal detection, and evaluation of BRET signal.

And we also provide three BRET derivatives that are widely used in research: BRET 1, BRET 2, and eBRET. BRET 2 uses DeepBlueC substrate, which can easily distinguish donor and acceptor emissions and reduce background noise signals. eBRET does not require frequent addition of substrates and has the advantage of high-throughput screening, but it cannot participate in the process of analyzing cell extracts or purified proteins because it relies on endogenous esterases.

Customers can choose different technology platforms according to project requirements, or contact us directly for consultation, and our expert team will provide you with customized experimental procedures.

Creative Proteomics is an international biotechnology company dedicated to research in molecular interactions and other related fields. The BRET technology and its derivatives we introduced can help customers better study the interactions between molecules, especially dynamic monitoring in vivo. Our one-stop service is designed to save customers time and money.

* This service is for RESEARCH USE ONLY, not intended for any clinical use.