Far-western blot is similar with western blot in which membranes are probed directly with specific antibodies, and is also referred to as a west-western or blot overlay assay. In contrast to western blotting where a target protein is usually known in advance, far-western blotting can detect proteins on the basis of presence or absence of binding sites without any previous knowledge about their identities.

Far-western blotting is now used to study protein-protein interactions, such as receptor-ligand interactions, and to screen libraries for interaction partners.

Far-western blot is an effective platform with low cost and high sensitivity. And when Far-western blot is combined with LC-MS-MS protein identification, the resulting protein spots (or protein bands) can be characterized and then subjected to further functional analysis, such as protein immunoprecipitation.

Depending on your needs, Creative Proteomics offers custom Far-western blot analysis services for detecting protein interactions. Also in combination with the LC MS platform, we can provide further functional analysis with reliable and reproducible data.

1. Protein quantification and separation by SDS or native PAGE

2. Transfer the protein from the gel to the membrane

3. Denature and renature the protein to ensure adequate exposure of protein binding sites on the membrane.

4. Block the membrane with BSA buffer.

It should be noted that the blocking agent may cross-react or disrupt the interaction of the protein to be studied in other ways, so a suitable blocking agent needs to be determined empirically.

The following strategies are commonly used to detect probe:

In order to improve the accuracy of the results, it is necessary to set appropriate experimental controls. For example, if the bait protein is a GST-fusion protein, a separate group of GST-tagged experimental groups is set as a negative control to exclude the possibility of non-specific binding of the GST tag itself to the target protein on the membrane. 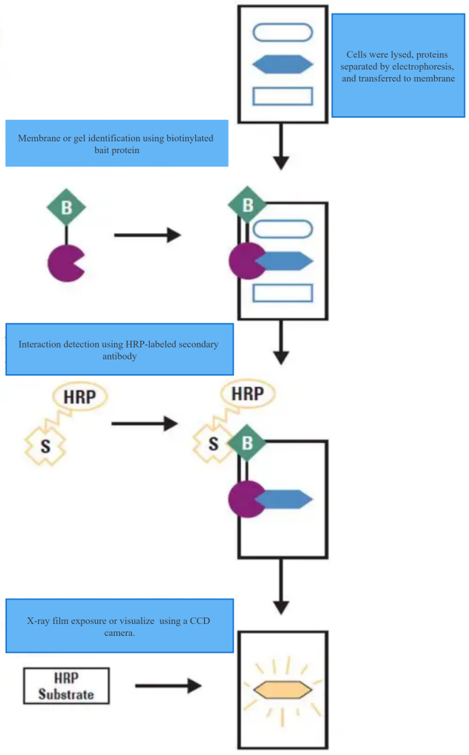 * This service is for RESEARCH USE ONLY, not intended for any clinical use.